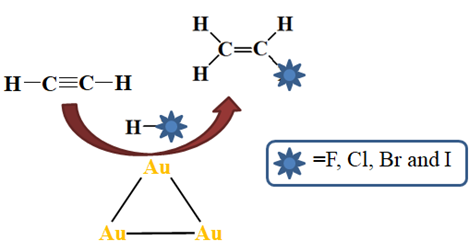 The mechanisms for the addition of HX (X = F, Cl, Br and I) on acetylene catalyzed by neutral acetylene Au3 cluster has been investigated within the formalism of density functional theory (DFT). The gold cluster is shown to play role as the bridge for the transfer of electron from highest occupied molecular orbital (HOMO) of Au3-C2H2 complex to the lowest unoccupied molecular orbital (LUMO) of hydrogen halide (HX). The reaction mechanism of the addition of HX on acetylene consists of two transition states, one intermediate, one de-adsorption product that leads to the final product. The addition of HF proceeds through barrier less transition state, while barrier for the first transition state enroute addition of HBr, HCl and HI 0.44, 5.64 and 6.27 kcal/mol respectively. The activation energy for hydrochlorination obtained in the current work is less than the ones reported in literature, the study reinforces the suitability of small sized gold cluster as an efficient catalyst for acetylene activation and subsequent hydrohalogenetion.