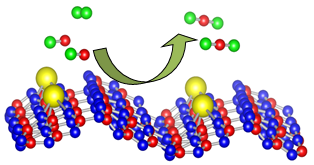 Density functional theory calculations have been performed to explore atomic Au decorated graphitic carbon nitride (Au@g-C3N4) as an active catalyst for CO oxidation reaction. Binding energy of Au atom to the carbon nitride substrate is found to be sufficiently strong to prevent the aggregation of adsorbed metal atoms to form clusters. Binding energy of both the reactants over Au@g-C3N4 is significantly higher as compared to that of the product. CO oxidation over Au@g-C3N4 is demonstrated to follow the Langmuir-Hinshelwood (LH) mechanism initially and then through the Eley-Rideal (ER) mechanism. Minimum energy path for both the LH and ER steps has been investigated through nudge elastic band and dimer methods. Highest energy barrier for first CO2 formation through LH step is calculated to be 44.19 kJ/mol whereas the second CO2 formation by ER step is found to be almost barrier less. Strong interaction between the reactants and catalyst surface is attributed to the observed charge transfer from metal d states to the * states of reactants.