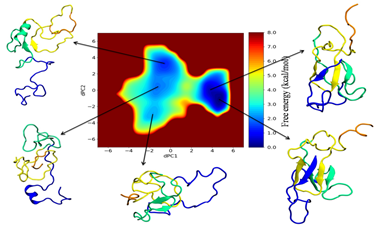 -Synuclein is an intrinsically disordered protein, whose aggregation into amyloid fibril is involved in the pathology of Parkinson’s disease. C-terminally truncated

-synuclein variants, which are naturally generated from the full-length

-synuclein, are enriched in the pathological

-synuclein aggregates and known to significantly enhance the aggregation process. In this work, we have performed extensive Gaussian accelerated molecular dynamics simulations (3.8

-sheet structure at different parts of the N-terminal and hydrophobic NAC domain, including the aggregation-prone NAC-core. We identified moderate intra- and inter-domain interactions within the N-terminal and the NAC domain that enhance and stabilize the partially folded

-sheet rich structures of AS(1-103) in solution. Such stable structural regions formed in the AS(1-103) ensemble, may serve as potential molecular signature that encodes the aggregation seed. The presented work enables characterization of conformational states of monomeric AS(1-103) in solution, and provide a plausible explanation for the experimentally determined enhanced aggregation propensity of C-terminally truncated variants of