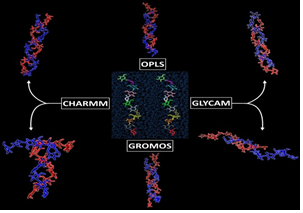 Despite being a key biomacromolecule, carbohydrate has received much less attention from computational community, compared to protein and lipids. This is majorly because of slow development of classical force fields for carbohydrate due to associated complexity in sampling its intrinsic flexibility and lack of an extensive assessment of existing carbohydrate force fields. Towards this end, the current work provides a robust comparison of four carbohydrate force fields (CHARMM36, GROMOS53A6CARBO_R, OPLS-AA, GLYCAM36) by evaluating their ability to simulate the dimerization process of a pair of amylose chain, the key ingredient of starch. The microsecond long molecular dynamics simulations on each of the four force fields capture spontaneous formation of double-helical self-assembled morphology from a pair of well-separated conformations. However, geometrical clustering of the trajectories reveal that these force fields mutually differ in sampling diverse array of conformations ranging from non-helical to partially open helical structures in addition to double-helical structures. Notably, the simulations reveal that relative to CHARMM36 and GLYCAM06 force field, GROMOS53A6CARBO_R over stabilizes the double-helical self-assembled morphology. CHARMM36 force field predicts significant transition between double-helical and partially open helical structure. The force fields differ in the relative propensity of parallel and anti-parallel double-helical formations. Overall by comparing all force fields in equal footing, this work provides a guided benchmark for carbohydrate simulation.