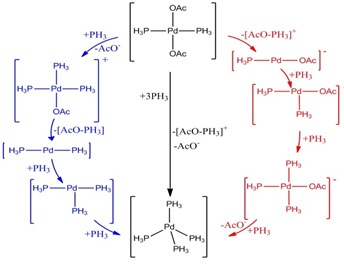 The formation of active catalyst species in the Pd-catalyzed reactions is studied using Density Functional Theory calculations. Taking palladium acetate and simple phosphine as the models, we estimated the energetics for the addition of phosphines, release of acetates, and associative exchange or ligands which convert the unreactive PdOAc2 to reactive species that takes part in the catalysis. Two consecutive addition of two phosphines, PdOAc2 + 2PH3  Pd(OAc)2(PH3)2) are exergonic steps with the free energies of activation 8.16 kcal mol–1 and 5.33 kcal mol–1. The associative exchange of acetate by PH3 in Pd(OAc)2(PH3)2 has 14.56 kcal mol–1 of activation barrier, while the exchange in [Pd(OAc)(PH3)3]– has the barrier of 5.22 kcal mol–1. Exchange reactions on neutral species that yields ionic species are endothermic in gas phase which is drastically reduced by solvation model. The addition of phosphines are exothermic. The dissociative steps are the removal of acetate anion, AcO–, or intramolecular dissociation of [AcO-PH3]+. This study is a basis for future studies of the active catalyst formation of various such catalysts involving different ligands.