Interactions between CD44 and HA16: An investigation on multiple binding modes of the complex by using molecular dynamics simulation studies 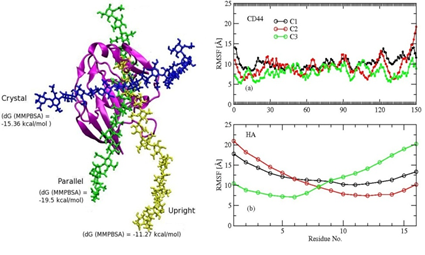 Hyaluronan (HA), a polyanionic polysaccharide acts as a signal transmitter molecule and regulates various cell functions while binding with a receptor protein CD44. X-ray crystallographic study has revealed one single binding mode however; multiple binding modes of CD44-HA complex have been identified by several researchers. In this work, we characterize the three different binding modes of CD44-HA16 namely, crystallographic, parallel, and upright modes by atomistic Molecular Dynamics simulations and Molecular Mechanics-Poisson Boltzmann-solvent accessible surface area (MM/PBSA) calculations. Attempts have been made to study the conformational flexibilities and the relative binding affinities of the three complexes. The interactions that contribute more to the overall binding free energies of the complexes have been investigated in detail. Further, the residues that are involved in the recognition process were identified. Our study infers that the recognition process is generally governed by the apolar interactions. It is apparent from our calculations that the polar contribution is unfavorable for the parallel and upright modes, however crystallographic binding mode is noted to be facilitated by the favorable polar interaction and the direct hydrogen bonding network that forms between CD44 and HA16.