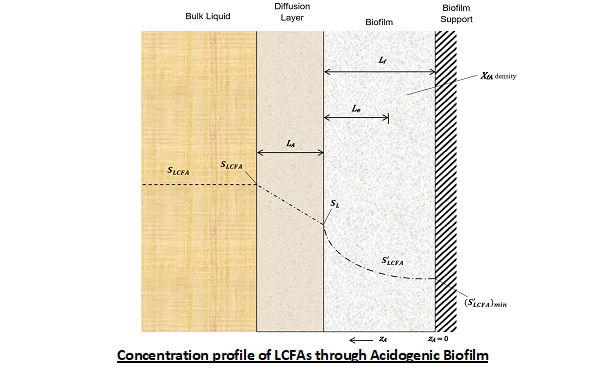 The present study focused on the modeling of a three-stage hybrid anaerobic digester, stabilizing fruit and vegetable waste (FVW), under limiting-substrate condition. The digester consisted of a hydrolytic reactor operated under suspended-growth condition, an acidogenic/acetogenic reactor operated under hybrid-growth condition, and a methanogenic reactor also operated under hybrid-growth condition. The three reactors were connected in series. Monod’s kinetics was used for modeling the substrate consumption in the suspended-growth part of all the three stages, whereas Fick’s second law of molecular diffusion was followed while modeling the substrate consumption into the biofilm that comprised the attached-growth microbes. This is to say that the model considered the substrate mass-transfer external to the biofilm, and into the biofilm as per Fick’s second law of molecular diffusion. Appropriate boundary conditions, which were relevant to limiting-substrate scenario, were incorporated while deriving the model and identical reaction kinetics were assumed for both the attached and suspendedgrowth systems. The step-by-step procedure to solving the mathematical model has also been suggested.