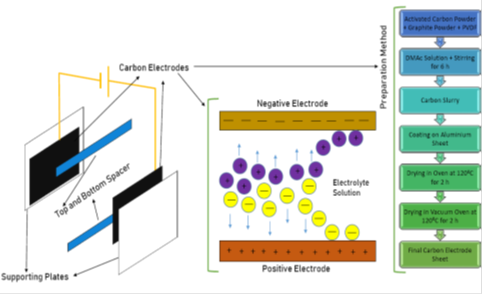 Capacitive Deionization has the potential to be a promising desalination method that can compete with the conventional techniques like reverse osmosis, multistage distillation etc. This research is focused on the fabrication of carbon electrodes for Capacitive Deionization. Initially experiments were performed with the varying proportions of PVDF (Polyvinylidene fluoride) to obtain its optimum composition for electrodes. Once the optimum composition for PVDF was obtained, having sufficient mechanical strength and favourable capacitive characteristics for the electrosorption of ions, further experiments were carried out for the electrode composition of AC:GP:PVDF::70:17:13 wt%. The experiments were conducted by varying voltage and pH on a sample of distilled water, which was further extended to tap water. It was observed that a maximum removal efficiency for F– ions of 98% for distilled water and 95% for tap water was obtained at a voltage of 1.5 V and a pH of 8.0. The regeneration of the electrodes was achieved by depolarizing them at 0.0 V.