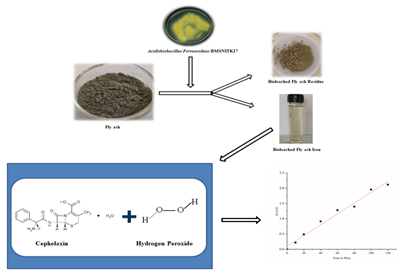 Iron is the sole energy source for the acidophilic bacterium Acidithiobacillus ferrooxidans. Feeding indirect iron source to this bacteria results in leaching of iron from complex minerals. In this study fly ash, a waste is fed to the isolated bacteria under stress condition and is made to recover the traces of iron present in the fly ash for its application as a Fenton’s catalyst to degrade Cephalexin. The investigation evaluates the leaching potential of a novel isolated strain Acidithiobacillus ferrooxidans BMSNITK17 in leaching iron from fly ash. About 89 mg/L of iron is recovered within the initial five days of inoculation. It is observed that the rate of metabolism of bacteria is very slow with fly ash as source. Catalytic efficiency of recovered iron was investigated to degrade Cephalexin, a major waste found in pharmaceutical and hospital discharge. About 87.98% of Cephalexin is degraded in first two hours with COD reduction of 74.21%. Reaction follows pseudo-first order kinetics with rate constant 0.017/min.