Ambient level of heavy metals were assessed at two locations within Kolkata, West Bengal, India from monthly 24 h average concentrations of Particulate Matter of diameter less than 10 u (PM10). This assessment utilized monitored samples of PM10 conducted by West Bengal Pollution Control Board (WBPCB), the state environmental regulatory agency from April 2013 to March 2016. Among the three metals, Pb concentration was obained maximum in the ambient air of Kolkata. The As metal concentration in ambient PM10 attained India’s National Ambient Air Quality Standard (NAAQS) of 2009 in most of the cases during the entire study period. For each of Pb and Ni metals, monthly 24 h average concentrations were non-complied with NAAQS during the year of 2014 to 2015 and complied with NAAQS in the two years of 2013 to 2014 and 2015 to 2016. From variation in concentration level of the three metals, pollution level of ambient air in Kolkata is assessed. 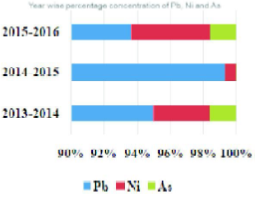 Year-wise percentage concentration of Pb, Ni and As metals in ambient PM10 at Shyambazar monitoring station