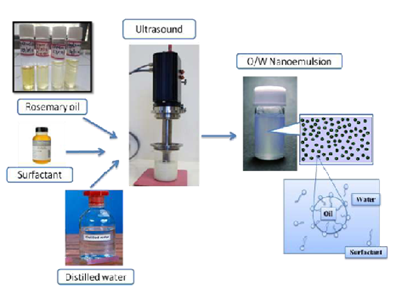 The present work deals with the studies of rosemary oil extraction methods by steam and hydro-distillation and analysis for functional groups, and components present. Rosemary oil contains sensitive volatile lipophilic compounds which can be easily degraded and vaporized during handling and processing. To protect these sensitive components from the environmental conditions and its utilization into the field of flavor, fragrance, and cosmetics formulations, nanoemulsions were prepared. The preparation of nanoemulsion requires high energy, and it was overcome by ultrasound which generates ultrasonic waves and helps in disruption of larger size droplets into smaller size droplets. On the other hand surfactant and its hydrophilic lipophilic balance (HLB) play an important role in the formation of a stable emulsion. Different ionic surfactants and its blends were used for the preparation. The result indicates that surfactant S80+T20 and S20+T20 (Span and Tween blends) gave stable emulsion and reached mean droplet diameter (MDD) of 85.41 and 84.33 nm respectively.