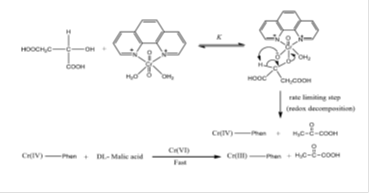 Hetero-aromatic N-base ligand like 1,10-phenanthroline (phen) assisted chromic acid oxidation of malic acid in aqueous sulfuric acid media have been studied under the experimental conditions, [malic acid]T >> [Cr(VI)T] at different temperatures. Under the kinetic conditions, HCrO4- has been found kinetically active in the absence of phen catalyst while in the phen catalyzed path Cr(VI)-phen complex has been suggested in the active oxidant. In the catalysed path, Cr(VI)-phen complex receives a nucleophilic attack by the substrate to form a ternary complex which subsequently experiences a two-electron transfer redox decomposition leading to Cr(IV)-phen complex. Then Cr(IV)-phen complex participates further in the oxidation of malic acid and ultimately is converted into Cr(III)-phen complex. Both the paths show first-order dependence on [malic acid]T and [Cr(VI)]T. The phen catalyzed path is first-order in [phen]T. These observations remain unaltered in the presence of externally added surfactants. Effect of anionic surfactant sodium dodecyl sulfate (SDS) and cationic surfactant N-cetylpyridinium chloride (CPC) on the phen-catalysed path has been studied. SDS accelerates the phen-catalysed path and CPC shows the rate retarding effect on the path. The observes micellar effects have been explained by considering the hydrophobic and electrostatic interaction between the surfactants and reactants.