The acuumulation of astaxanthin from Haematococcus pluvialis in different stress factors 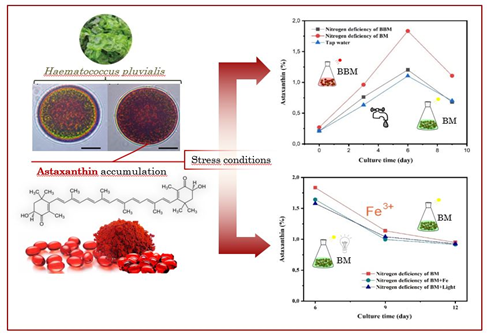 Astaxanthin is a high antioxidant which is red carotenoid pigment obtained from many microalgae species. It is an important preservative of the immune system and it is used in the treatment of cancer, skin and heart diseases. The most efficient source of astaxanthin is Haematococcus pluvialis microalgae. In this study, the optimum cultivation conditions of H. pluvialis and the accumulation of astaxanthin were investigated. Bold Basal media (BBM) and Bristol media (BM) were used for growth media. Different stress conditions were applied and the astaxanthin accumulation was examined. The stress conditions were the application of different illumination power, the addition of tap water and iron, nitrogen deficiency in both BBM and BM. The amount of astaxanthin, dry cell weight and cell count were measured. BBM was found to be more efficient than BM on growth of microalgae. The nitrogen-free BM was more efficient for production of astaxanthin than BBM. Using tap water has been also found advantageous in terms of cost. The effect of illumination power did not make any differences on astaxanthin accumulation.