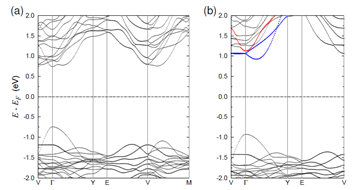 We report the density functional theory structure optimization and electronic structure calculations of TlGaSe2, TlGaS2, and TlInS2 compounds. We find that there is a weak bonding between Tl and the chalcogen while Ga and In make covalent bonds with the chalcogen. The s orbitals of the chalcogen hybridize with the d orbitals of Tl, bringing additional directionality to the Tl-chalcogen interaction. There is no direct Tl-Tl bond. Although these three compounds are extremely similar, the band structures exhibit quantitative and qualitative differences. The optimized TlGaSe2 and TlInS2 crystals have direct band gaps while TlGaS2 has an indirect gap. The lowest unoccupied states have a bonding character between the p orbitals of the adjacent Tl atoms. These states form conduction channels along the Tl chains. The valence band maximum originates from Tl-s orbitals and its position in the Brillouin zone is robust. Almost degenerate Tl-p related bands are affected differently by the interlayer interaction. Therefore, minute changes in the structure may shuffle their energy levels, resulting in qualitatively and quantitatively different band gaps in these extremely similar compounds. External pressure and defects may initiate the same type of electronic structure changes resulting in contradicting results in experiments. A small down-shifting of the unoccupied parabolic bands lead to several valleys in the conduction band of TlGaSe2.