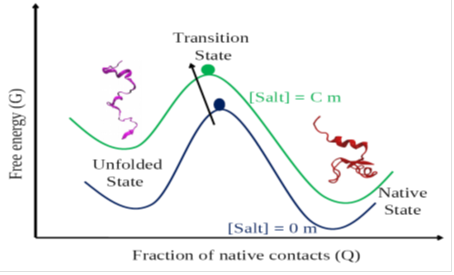 The transition state ensemble (TSE) plays a key role in determining the folding time scale of small single domain proteins, which exhibit two-state folding kinetics. Salts can change the stability of protein conformations and strongly influence the protein structure in the TSE. In this paper we studied the effect of protective salts, which stabilise the protein folded states, on the TSE of DNA binding domain of lac repressor protein (lac-DBD) and N-terminal domain of ribosomal protein L9 (NTL9) using a coarse-grained protein model and computer simulations. The effect of salts on the protein conformations is taken into account using the molecular transfer model (MTM). We show that the TSE of lac-DBD is homogeneous, while the TSE of NTL9 is heterogeneous. The protective salts used in the study shift the position of the TSE for both the proteins towards the unfolded state in agreement with Hammond’s postulate.