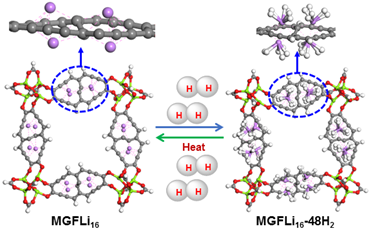 Hydrogen holds the promise to replace the widespread dependency on fossil fuels due to its renewable and pollution free nature. Metal-graphyne framework (MGF) constructed with magnesium oxide as a metal node and graphyne as a linker. Graphyne is a new 2D carbon allotrope connected with acetylenic linkages. Lithium is grafted on the graphyne linker of MGF. Density functional theory (DFT), with GGA-PBE exchange-correlation functional, is used to determine the geometric structures, their stability, binding strength of Li and graphyne of MGF, and hydrogen storage capacity. On full saturation with hydrogen, each Li atom physisorbs 3 H2 molecules in the MGFLi16 which results MGFLi16-48H2 system with a total gravimetric density of 7.2 wt.%. Further 12 more H2 molecules could be accommodated in the pore space of MGFLi16 and the resulting structure, MOFLi16-60H2 is obtained with hydrogen wt.% 8.9. The H2 and Li interacted by Niu-Rao-Jena mechanism with average H-H bond distance enhanced up to 0.754 Å. The calculated sorption energies are found in the range of 0.36 to 0.21 eV. The molecular dynamics simulations reveal the stability of Li grafted MGF and the reversibility of adsorbed H2 from the MGFLi16-48H2 system. The energetics and storage capacity meet the US DOE target which makes MGFLi16 as a potential hydrogen storage material.