An azido adduct of Schiff base manganese(III) phenoxo-bridged dimer in dual action: Sensing of benzene and phenoxazinone synthase activity 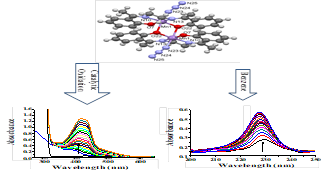 A binuclear phenoxo-bridged azido adduct of manganese(III) Schiff base complex has been synthesized. Structure analysis reveals that two units of the tetradentate Schiff base forms the equatorial plane around manganese(III) center in this complex. One of the axial positions is occupied by a terminal azide, while the remaining axial position of the octahedron is connected to a phenoxo group of the neighboring monomeric unit which forms the bridge in the dimer. The benzene rings attached to the two adjacent Mn atoms through O are slightly opened up at their rear ends. The distance between the benzene rings facing each other gradually increase outward. This opens up the possibility of interaction with guest molecules which thereby results in sensing of the analyte molecules. The synthesized binuclear complex was evidently found to have dual actions in sensing and catalysis. Interesting spectral features of the compound allow it to act as a sensor towards an aromatic hydrocarbon, benzene down to ~0.06 mM (4.37 ppm) concentration range. A promising catalytic phenoxazinone synthase activity was also observed in the same compound due to the oxidation of o-aminophenol (OAPH). The Michaelis binding constant (KM), maximum velocity (Vmax) and turnover number (kcat) were found to be (1.09±0.3)×10–2 M, 5.77×10–8 M s–1 and 20.77 h–1, respectively. The rate determining step is governed by formation of substrate-catalyst adduct of OAPH with complex 1 followed by free radical mechanism. The structural and electronic parameters of complex 1 were justified by density functional theory (DFT) and time dependent density functional theory (TD-DFT) computations.