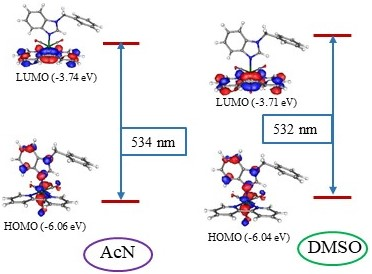 Synthesis of CO-releasing molecules that safely deposit/transport CO has attracted great attention after the discovery of therapeutic properties of carbon monoxide, which is known to be a toxic gas. Metal carbonyl complexes seem to be the most important alternative as CO-releasing molecules. Recent developments in computational chemistry make it possible to gain many information about the properties of complexes before being synthesized. On the other hand, molecular docking methods can also give valuable information about the interaction of the molecules with tissue. The metal carbonyl complexes that were synthesized as a CO-releaser interact primarily with blood proteins when they enter the tissue; therefore, the theoretical analysis of the interaction of complexes with blood proteins can give useful information. In this study, [Re(bbim)(bpy)(CO)3]OTf (bbim: benzylbenzimidazole; bpy: 2,2-bipyridyl, OTf: SO3CF3) complex was synthesized, characterized, analyzed by DFT/TDDFT based calculation method and docked into human serum albumin.